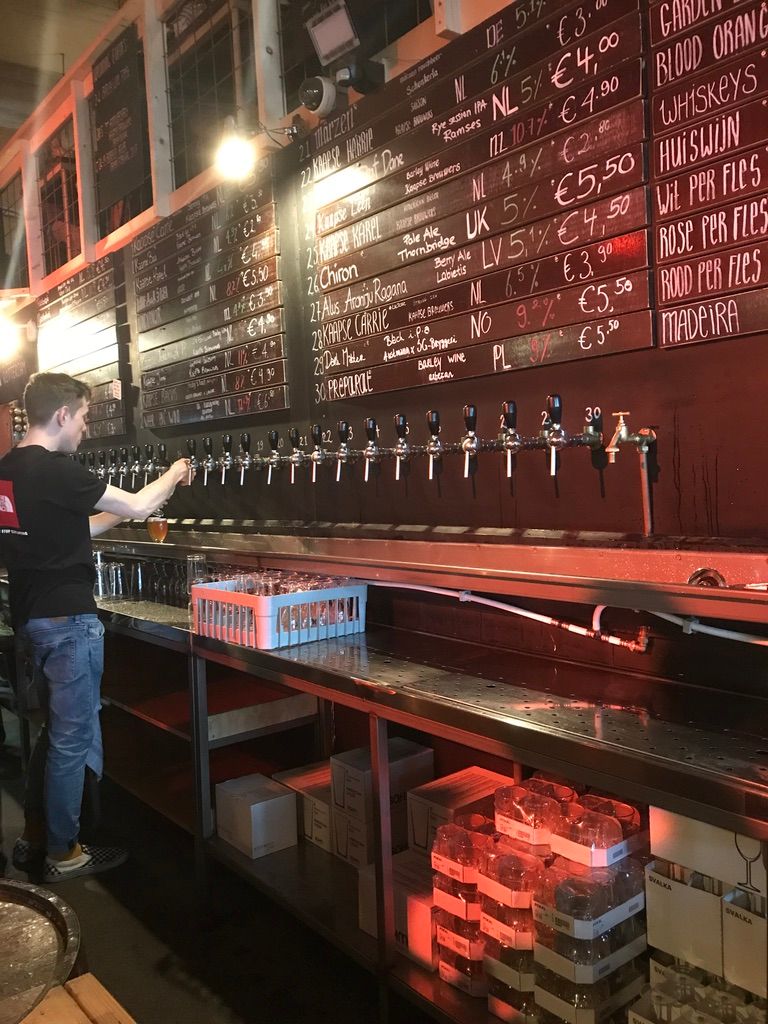 A Weekend Trip to Holland and an Evening at Kaapse Brewers

In May of 2017 my girlfriend and I decided to take a sporadic weekend trip to Rotterdam. As with all of our last minute travel plans, we had no idea what we would be doing when we got there. We typically like to play things by ear, walk around the city, and enjoy the food and local beer scene.

On the flight over the flight attendants informed us that the tulip festival was going on in Keukenhof. We put that on our list along with a visit to the maritime museum and a walk along the canals of Rotterdam. We really only had one full day to explore so our activities were pretty limited.

The main reason I’m sharing this post with Small Batch Brü followers is because we visited a great little brewery across the river from where we were staying in Rotterdam. The brewery was located inside of a market that was housed in an old warehouse building. There were butchers, bakers, and….brewers!

After a quick google search for nearby breweries we stumbled upon Kaapse Brewers, a great little nano brewery located inside the Fenix Food Factory. If you’re staying in the city center, then you can take a nice walk across the bridge, or just catch a water taxi to cross the river. Fenix Food Factory sits right on the river – about 10 minutes walking distance from the water taxi stop.

As you enter the market the brewery is to the right. The brewery is up against the “front” wall of the taproom and it’s tiny! I’m going to guess and say it’s a 5 barrel system. Hot liquor tank, boil kettle and a mash tun lined with wooden staves that resembles a foeder you would find in a sour beer barrel room.

The beers at Kaapse are a snapshot of what’s happening in the beer world. They definitely know what the people want. There is a West Coast IPA that was fantastic, as well as a Saison that couldn’t have been brewed closer to style. It was still a little chilly outside in April, so I went ahead and tried a glass of the Barleywine. It was big, bold and definitely kept me warm during our walk back across the river.

Their “experimental series” is what really makes Kaapse stand out in Rotterdam. They produce one-off beers that experiment with all kinds of different malt and hop combinations. The brewers there seem to be very influenced by US hops and beer styled that are currently popular in the US. Mostly big hoppy beers that are loaded with US hops and malt.

So if you’re ever in Rotterdam and need a place to grab some amazingly brewed beer, then swing by Kaapse Brewers in the Fenix Food Factory. Between the amazing food offered by all of the vendors, and the carefully crafted beer at Kaapse, you will not be disappointed.