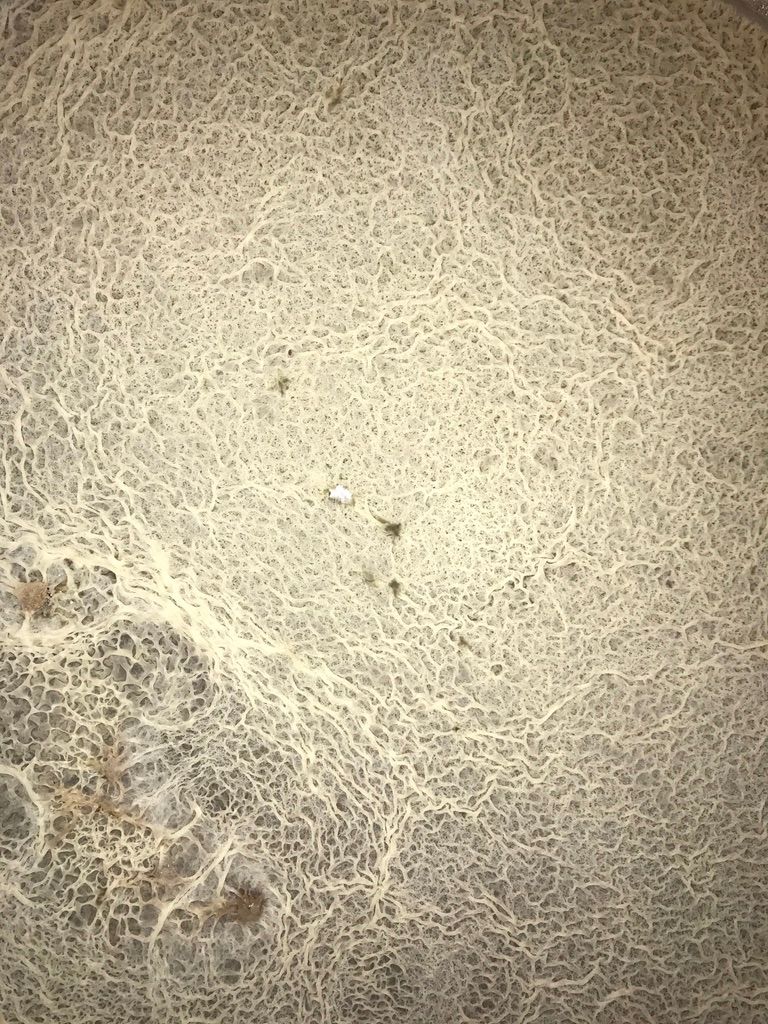 Summer 2017 is coming to an end and so shall my summer beer styles. Since the last Berliner Weisse was such a hit amongst my household, I decided to brew another 5 gallon batch o the same style. My first Berliner Weisse was kettle soured by keeping it outside in the hot Houston sun on my balcony, but the temps were not consistent and it didn’t get quite as sour as I wanted it. Now that I have the Robobrew, I was able to hold this batch at a solid 100 degrees for about 3 days until I got it down to a pH of about 3.2. A beautiful pellicle also formed during the souring process.

I had a few goals in mind for this beer. I wanted it to be a little more tart than my first attempt at a Berliner, and I wanted to try to lose that mineral-like flavor that was present in Berliner #1. Shall we proceed to the recipe?

1 oz Hallertau in the fermenter

0.8 liter starter of a 200 ml slurry of US-05. I don’t actually remember what the yeast came from

15 minutes to pasteurize the wort

30 minute boil to kill the lacto

This was an extremely quick brew day with a really long boil since I somehow collected way too much wort. I also kind of forgot about the boil since I moved the Robobrew outside. I collected about 6.8 gallons of pre boil wort and then boiled down to about 5 gallons remaining in the kettle. After a 2.5 hour boil, I would hope that any unwanted bacteria would be dead.

I pitched the WLP677 lacto into the boil kettle after it had cooled down to about 100 degrees. The Robobrew thermostat was then set to 100 degrees, the lid was placed on the kettle, and the 72 hour souring process began.

An awesome pellicle had formed in under 24 hours, but I think a little too much oxygen may have been present. As I removed the lid, a cloud of death filled the air in my tiny apartment. It was definitely one of the weirdest smells I’ve ever experienced.

It was my hope that the smell in the kettle would not carry over to the flavor and / or aroma of the finished beer. More on that later…

I cranked the heat on the Robobrew and boiled the soured wort for about 30 minutes before chilling to pitching temps. Pitched the US-05 starter in 70 degree wort and then placed the fermenter into the cool brewing bag with two 1 liter frozen water bottles. I taped a temperature probe to the carboy and these two bottles got me a fermentation temp of about 68 F.

Hurricane Harvey hits before fermentation really takes off and Liz and I decide to leave for our vacation early. The Berliner will have to do it’s own thing for the next 10-12 days!

We’re back from an awesome trip to Ireland and the Berliner has fermented out to about 1.008. It still doesn’t smell great. I go ahead and transfer to a keg and set the regulator to 12 PSI.

It’s a little darker than I’d like in. Instead of a very light straw, it is almost a pale yellow or golden. Bits of hop particles are floating around in the glass, probably from being in a hurry during the transfer to the keg, and also from being the first pull off of the keg.

That weird, almost putrid smell is still present. I can already tell that this beer is probably going to be a dumper.

It has a light mouthfeel and it’s pretty dry, but you can taste the smell that I’ve been experiencing and it’s not pleasant. I think there may have been a problem with too much oxygen during the kettle souring process. Not really sure what else would cause the problem.

What to change for next time

The brew day was honestly really disorganized and not typically how my brew days progress. My note taking was sloppy, I forgot to start a mash timer, I forgot to add hops during the boil and I completely forgot about the boil while it was outside.

For the next Berliner, I’ll brew the same recipe but pay closer attention to my process and I’ll probably purge the headspace of the kettle with CO2. I may even try a different source for lacto such as good belly or a yogurt with cultures.

If you have any tips on how you brew your Berliner Weisse, I’d love to hear from you. Shoot me an email at [email protected] or just comment down below! Thanks for reading and hopefully the next Berliner brew day produces a less-funky result!