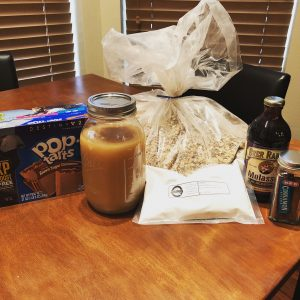 It’s that time of year…spiced beer season! I’ve been seeing a lot of cereal beers lately. Count Chocula Stouts, Corn Flake Cream Ales, Fruity Pebble IPAs. I figured I would try something in line with the breakfast food theme that seems to be trending currently.

I remember hearing that 21st Amendment did a Pop Tart beer in collaboration with Kellogg’s since their brewing facility was located in an old Kellogg’s plant. Nothing reminds me more of childhood breakfast food than brown sugar and cinnamon flavored Pop Tarts. I think it may have the only flavor my parents ever bought. I was never really a fruit-for-breakfast kind of kid.

So after hearing about the 21st Amendment Pop Tart beer, I knew I had to brew up my own. I decided on the darker side. Something malty with cinnamon and molasses to mimic the flavors of the cinnamon and brown sugar. And OF COURSE I put brown sugar and cinnamon pop tarts in the mash!

This was also the first brew day with my Mom. She came over to hang out and brew with me for the day. She’s a big fan of my beers and I’m glad I finally got to share the process with her.

The brew day went pretty well, but at the end of of the day I decided that a brown style of beer will probably work a little better with this concept. But we’ll talk me about that later in the tasting notes.

Let’s take a look at the recipe and the brew log.

This was my first brew day with my Mom hanging out with me. Started around 12:30 PM. Mash went well Hit all the temps and pulled the basket at 60 minutes to let the wort drain from the grains. This batch turned out a little darker than I would have liked. I think all of the roasted malts and the molasses were a little much. I think a cinnamon pop tart beer might be better with a brown ale style or maybe even an Oktoberfest grain bill. OG was 1.054 which was one point shy of my target. I didn’t pay close attention during the chilling process so the wort got a little cold. I pitched in the high 50’s, but I think the yeast will be fine.

Racked to a three gallon PET secondary and added 2 cinnamon sticks. FG is 1.019. I tried to swirl the carboy during fermentation to get it down a little more and I even raised the temp to the mid 70s. It just didn’t want to get any lower than 1.019. The temps are cooler outside this time of year so this beer will do into the storage unit for a few weeks. Ambient temps in the storage unit are anywhere from 50-75.

Tasting notes from the sample taken today – the color is an opaque black. Oil black. Aroma is chocolate, roast, and coffee. Flavor is malty, mostly chocolate and a hint of coffee. There is a little sweetness but not cloying. The pop tarts are definitely lost in the roast and dark malt flavors and aromas.

I have some friends coming over this weekend and the homebrew is running a little low in both kegs. I racked from secondary into a 5 gallon corny keg and burst carbonated at 30 psi for 18 hours. We ended up drinking mostly cocktails, so this keg has been set aside and we’ll have to wait until the Oktoberfest keg kicks. I think I will more than likely have to hook it up to CO2 for a little longer. Tasting notes coming soon! Just based on the tasting of the sample, this one has about a 70 percent chance of being dumped.

Dark brown to opaque black with little to no head as it pours from the faucet. Retains a small ring of bubbles around the glass.

High coffee aromas and roast notes. Low cinnamon. It’s mostly the roast malt. Too much in my opinion. No DMS or diacetyl

The roasted grains are in the forefront. Very roasty, but not acrid. There are some coffee notes even though there is no coffee in the recipe. Low cinnamon flavor in the finish. Finishes sweet, but not overly sweet. No hot alcohols or other off flavors. Clean fermentation

Light body and thin mouthfeel. Has the body of a Guiness.

Thoughts and Tips for Next Time

I just don’t think I picked the right beer for a pop tart themed beer. I think I will try this concept next time with a brown ale. If I do brew another porter or stout anytime soon I’m going to keep it simple and maybe back off a little on the chocolate / roast malts. I think I will try to sprinkle some of the darker malts on top of the grain as I sparge. The dark roast grains are just too prominent in this beer.