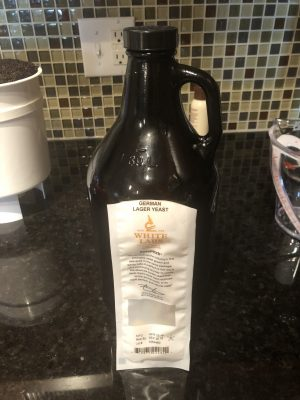 Lagers are known for their clean, crisp character with little to no esthers. For hundreds of years, brewers have been fermenting these lager yeasts at lower temperatures than their ale counterparts. But lately, both commercial and home brewers have been questioning this “long and cold” lager fermentation dogma. I recently brewed a split batch of a simple Munich Helles recipe for the guys over at Experimental Brewing. The brew days were staggered and every aspect of both brew days were matched; except for one variable: the fermentation schedule.

Batch one was the “traditional” lager beer. I filled my mash tun with distilled water and added my water adjustment minerals the night before the brew day. The delay timer on the Robobrew was set to begin heating my strike water before I woke up the next morning. I mashed in early in the morning and recirculated the mash at 153ºF for 60 minutes. After a 60 minute mash, the grain basket was pulled and I sparged with 72ºF water. (I’ve been “cold-sparging” lately and I’ve found that it only lowes my efficiency by a few percent.) Before I doughed in, I put together a 1.036 OG 1.5L (shaken, not stirred) starter with one package of WLP830.

6.75 gallons of wort were collected in the kettle and the Helles was boiled for 60 minutes. After the boil, I chilled the wort down to about 90 degrees with my immersion chiller before transferring 5 gallons of 1.048 OG wort into my 7 gallon Fermonster plastic carboy. I put the fermenter in my fermentation chamber to chill the rest of the way – down to a pitching temperature of 48ºF.

The next morning, I pitched the full volume of the starter into the 48ºF wort and fermented using the following schedule:

Beer 2: Brewed when I started to cold crash beer 1

Brewed the day I transferred beer 1 to keg and began the cold crash. Beer 2 was an identical setup and brewday. Water was prepared the night before and strike water was ready to go when I woke up. I put the starter together, mashed for 60 minutes and cold sparged to collect 6.75 gallons for a 60 minute boil. The wort was chilled to 80 degrees with the immersion chiller and 5.25 gallons of 1.048 wort were collected into the 6 gallon Fermonster. The carboy was placed in the fermentation chamber and chilled overnight to pitching temperature. Beer 2 was crashed after the fast lager method as spelled out above and both batches were finished conditioning on the same day due to the staggering of the brewdays and fermentations.

These beers were served to 9 tasters over the course of a few weeks. Tasters were given two samples of the “traditional” lager and one sample of the “fast” lager. Tasters were blind to the variable and were only told that two beers were the same and one was different. To obtain significance, we needed 5 out of the 9 to pick the unique sample, but only 4 were able to pick the unique beer. This experiment, in addition to other experiments performed by the guys over at Brülosophy, shows that there is no perceivable difference between a lager fermented “long and slow” versus a lager fermented with a shorter, modified fermentation schedule.

While I thought that I could tell the difference in side-by-side comparisons, I was only able to pick out the unique sample 3 out of 10 times that I tested myself. Based on these findings, and also based on experience from other brewers (both commercial and amateur), I have no problem compressing the time that I take to ferment a lager. However, my brewing schedule tends to cater more toward the longer lager method since it takes me quite a while to finish kegs. I pretty much brew the day that I keg and then let the next beer condition while I’m drinking the finished ones. If you have any questions or comments about lagering techniques, feel free to comment here or shoot me an email at [email protected]. Thanks for reading!