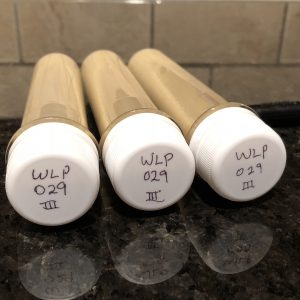 Session beers are a big part of my homebrewing repertoire. While the Kölsch is a simple recipe it can be very difficult to brew. Like any “light yellow” beer, there is nowhere to hide flaws. A clean fermentation is critical in order to avoidn ester production. My number one goal for my brewing currently is to pay close attention to my yeast health and fermentation temperatures.

For this batch, I’m using a second generation pitch of WLP029. I store my slurries split up into plastic “baby bottle” test tubes that I sanitize and store in my fridge. Mason jars are really the only vessel I have available to make starters, so I split a slurry in half – in two 1 liter mason jars with 600 ml of 1.040 wort each. Each mason jar produced about 50 ml of slurry after 24 hours.

I decided to go with 100% distilled water on this batch and I used Bruin Water to build up my water profile. The water profile and mineral additions are listed below in the recipe.

I also decided to mix things up a little bit and use Huell Melon hops. They’re a pretty new low alpha hop with fruit and citrus aromas that I think will play well in a Kölsch.

Check out the recipe here!

Brew day began around 11:15 AM. Enjoying mimosas and breakfast tacos while the mash water is heating up. I usually don’t drink during brew days, but it’s a beautiful Sunday morning and we found some Oj in the fridge….and it happened to be right next to the champagne.

15 minutes into the mash, the pH measured about 4.9. I really need a better acid measuring method. I’ve been weighing my liquid 88% lactic acid additions with a conversion I googled. Clearly it’s not completely accurate. To raise the pH, I added 2 grams of baking soda.

The rest of the mash and boil went as planned. OG was 1.050. Chilled with groundwater and added a little ice to the sink instead of using the cooler like I do in the warmer months. Houston has been pretty chilly for the past few weeks. We’ve even had a few freeze days. So the water is perfect for cooling this time of year.

The fermentation went great and the TILT pulled through again. The beer finished at 1.009 – which is about 80 percent attenuation. Not bad! I crashed to 32 degrees a few days prior to this. Today I racked into a keg and pressurized to 30 psi. I set this keg aside at room temp because I still have some pop tart stout to finish. (Which I probably won’t…it’s not great). Sulfur aromas are present. Flavor is moderate to low hop and moderate to low malt. There is some citrus and fruit in the aroma.

Diacetyl…..womp womp. I really need to figure out a way to clean up my diacetyl problem. I think I need to ramp the temperature a little sooner to get the yeast active in an early fermentation stage.

Clearing up nicely and it’s chilled and hooked up to gas. Color is golden with “tight” white creamy head that sticks around for a few minutes and then turns into bubbles around the rim. Some sulfur still in the aroma. DMS and diacetyl are still present. Malt forward with a slight fruity, citrusy hop finish. Easy drinking, but the diacetyl is distracting. Reminds me of my cream ale, but a little more hop nose and flavor.

I want a little more hop flavor and aroma for this style. I also need to figure out what’s going on with my fermentation and my diacetyl problem. For my next lager or cream ale, I’m going to start ramping up the temp on day 2 or 3 instead of waiting until 4 or 5.

It’s an easy drinking beer, but the off flavors are distracting from the style characteristics. Definitely won’t be sending this one to a competition. Maybe as a Czech Pilsner.

I took some of the yeast cake and split it up into some “baby bottle” test tubes. I’ll use these little guys for my next cold-fermented ale. I might even use it for my Helles.

Thanks for reading. Comment below or feel free to email me at [email protected]