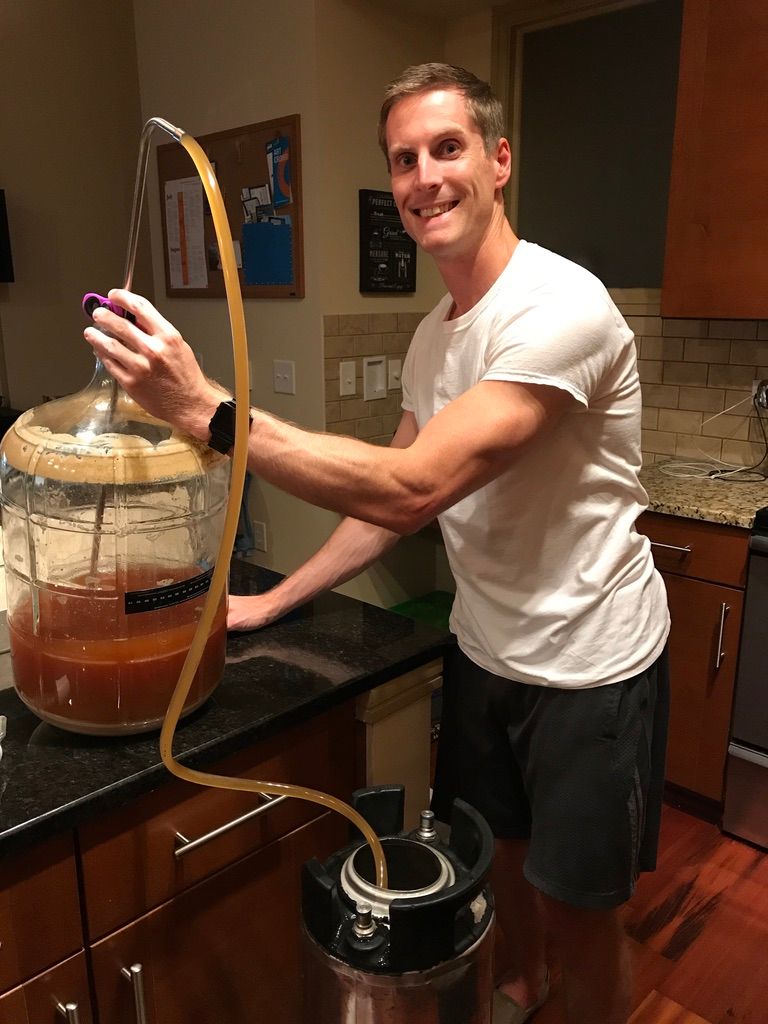 When I got into this hobby about a year ago, I thought that I would be exclusively brewing one gallon batches. After a few of those I decided that the work involved to produce seven bottles of beer just wasn’t worth it. I moved onto three gallon batches, which was perfect. I got to upgrade my brewing system to an igloo mash tun, and I would have three times as much beer! Then came the brew day for my first sour. I asked myself, “Why would I put three gallons away to age for a year when I could just as easily put away five?” And so my first five gallon batch was born.

After the five gallon batch of Honey Wheat Farmhouse Saison I reverted back to a three gallon batch for my Saaz Saison. Then came some life changes that led to that beer sitting in the fermenter for quite a bit longer than previous batches. I just didn’t have the time or the energy to bottle it. It was that batch of beer and my lack of time at home that led me buying a kegerator and two five gallon corney kegs.

Long story short, I brewed a five gallon batch of my Berliner Weisse and needed something else to fill the other keg. My girlfriend’s family might be visiting soon so I took requests and a pale ale seemed to be the majority vote. And so my Lady Liberty Pale Ale Recipe was born.

I borrowed bits and pieces from recipes by Brad Smith and Jamil Zainasheff to come up with what I hope turns out to be a beer that everyone enjoys from the kegerator on their visit.

I started brewing around 10:30 AM after a trip to the local homebrew store. The plan for today is to get the Lady Liberty Pale Ale brewed and rack a few bottles out of the Honey Wheat Farmhouse Saison that has been in primary for about 6 months. I’ll be using Keg Ninja for the first time on this beer and a review of that recipe calculator will be available soon. It’s an awesome free web app that serves as a recipe builder, brew day assistant and it also helps you keep track of what you have in your brewery “pipeline”.

Collected 6.5 gallons into the kettle

I didn’t get all 5.5 gallons in the fermenter. Dumped about .25 gallons.

During the boil my kegs arrived in the mail and I kegged the Berliner Weisse.

Cooled in a water / ice bath in the sink for about 3 hours until temp was down to 90 degrees F and transferred into the carboy. I let the wort cool in the carboy overnight in the cool brewing fermentation bag.

24 hours later and fermentation is going nicely with a 4 inch kreusen at 65 degrees F. The bubbling of the airlock is much slower than when I would ferment at ambient temps of 75 degrees. Hopefully the lower temps result in fewer esters and a cleaner beer than I’ve had up until I started controlling my temps.

Yeast has pretty much flocculated and bubbling has stopped in the airlock. The temps have held at 65 degrees with two 1.5 L bottles in the fermentation bag. I removed 1 bottle to slowly start raising the temps to help the yeast clean up. I won’t be home to keg this beer until probably July 7 or 8.

Racked 4.5 gallons into a keg and set to serving pressure of 11 psi. Should be good to go next week. I’m honestly not really digging the cascade or the centennial. I’m tasting soapy flavors and earthy aromas that I’m not really fond of. I think the next beer will be a Citra session IPA. I just wanted a little more fruit and citrus.

I think it’s a little soapy. Not really digging the smell and flavor quite yet. It’s also pretty cloudy. Maybe I just don’t like centennial or cascade. I guess only time will tell

It’s a little less cloudy. As I pull more pints I think the hop material and yeast is getting pulled from the bottom of the keg. The flavor and smell isn’t really soapy anymore – it’s actual more of a strong yeast flavor. I was making bread today and the beer tastes just like my yeast starter for my bread smelled. I think it’s getting better.